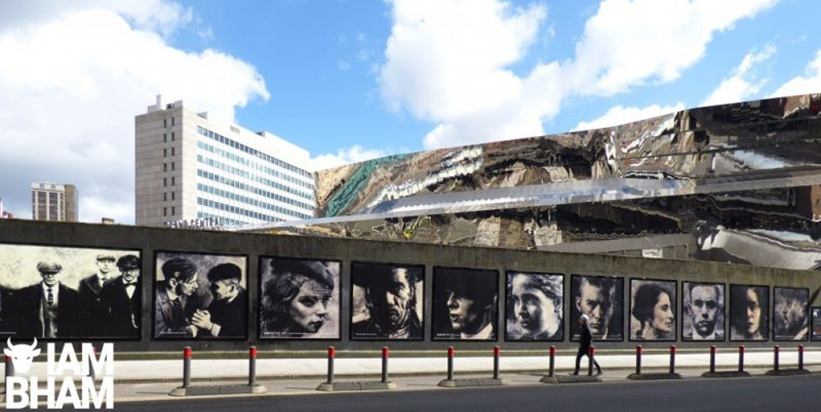 Discover the Origins of Peaky Blinders in Birmingham

Do you recognise these people? If you arrive in Birmingham by train, this 50 metre wall of portraits of major characters from Peaky Blinders will catch your eye on your way out of Birmingham New Street station. And that’s just the start of your Peaky Blinders experience in Birmingham! Our campus is located in Digbeth, the very area where the name “Peaky Blinders” was first coined, and in February 2022, it was announced that a brand new TV and film studios for a Peaky Blinders feature film would be built near our school! Read on to learn more about the historical Peaky Blinders in Birmingham as well as the many attractions related to the hit TV show that the city has to offer.

If you’re reading this, you’ve probably seen the hit BBC crime drama about the street gang headed up by Tommy Shelby. But how much do you know about the historical Peaky Blinders gang? They were actually active earlier than in the TV show, just before World War I, from the 1890s to 1910s. The name “Peaky Blinders” was first used in 1890 in a news report describing a fight that broke out near the Rainbow Pub on Adderley Street. The pub still exists today, with cocktails, food and live music, and is just an 8 minute walk from EP Birmingham! If you want to see where the Peaky Blinders once operated, the whole area around campus is well worth a walk – many of the old industrial buildings remain, but nowadays you’ll also spot a lot of street art, and the nearby Custard Factory is home to tons of creative businesses and independent shops, cafes, bars and restaurants.

After you’ve explored Digbeth, you’ll want to head over to the West Midlands Police Museum. Visitors can see the Steelhouse Lane lock-up built in 1891, learn more about the real Peaky Blinders, and even sit in the cells they once occupied! Nearby the Police Museum is also Escape Live where you can book a Peaky Blinders-themed Escape Room. If you want to see what the streets of Birmingham would have looked like back when the Peaky Blinders were around, you can also take a tour of restored homes of ordinary working class families in the 19th and 20th centuries at Birmingham Back to Backs.

If you would like to venture slightly further afield, we highly recommend a day trip to the Black Country Living Museum just up the road in Dudley, where many of the scenes from the Peaky Blinders TV drama were filmed!  This outdoor museum recreates what the area would have looked like during the time of the Peaky Blinders with reconstructed shops, pubs and houses. You can see live industrial demonstrations, take part in a 1912 school lesson, play old-fashioned street games, watch a film in the 1920s cinema, and try some traditional food and drink. It’s a must for any Peaky Blinders fan.